As I mentioned, Geoffrey had a little accident in the bed a couple days ago.  This has never happened as long as I can remember having him around, and he’s always down to sleep on or in the bed if it’s cold enough (He’ll just crawl under the covers on his own).  Half-n-Half had a case of the sniffles 2 weeks ago, those went away in about a week, but then a couple of days later, I noticed Geoffrey seemed … not quite himself.  While he’s not the most energetic animal in the world, I’m able to tell the slight difference in how he moves, how often he changes his sunning spot, etc. and know when something’s possibly up.

I’ve been giving him his fluids, his potassium pills, everything like I’m supposed to.  However, after the bed-pee incident, I really began to worry, and noticed he started looking like he did before around Christmas.  He was having major trouble using his back legs, not sure if it’s neurological or just muscular or what, but they’re just weak.  Anyway, since Saturday night, I’ve been checking on him daily, and he and I somehow managed to work out a … method of him telling me when he has to pee.  It’s not like he yowls like a banshee, but again, something in the way he meowed at me said “I gotta piss…somewhere.” 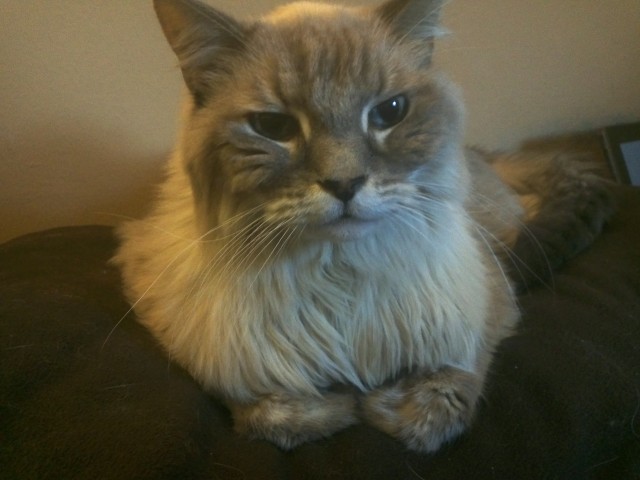 So I’ve been carrying him over to his litter box, sitting down with him, holding his back legs up a little for him (since otherwise he’dd just be sitting down while peeing, soaking in urine and cat litter), and sure enough, every time I’ve done it, he’s had to go.  So there haven’t been any more accidents.  However, a little cat urine isn’t that big a deal, it’s his health.

I was taking him to the vet again today to get his iron/anemia checked anyway, but it turned into another panicky situation.  Fuck, I’m tearing up right now just typing this, but they took his weight, and I think it was like 13.5 pounds, down from 15 just 2 weeks ago.  He’s  back in the same situation again, his fur got super dry overnight, lots of dander despite me having brushed him with a regular and flea/dander comb for a half hour yesterday… So he’s .. yeah.

And the entire time he was at the vet, he never bitched, and purred the entire time.  If he wasn’t such a badass sweetheart it might not be so gut-wrenching.  They checked his levels, and they’re back to about what they were around Christmas.  His kidneys aren’t “shutting down”, but .. he’s old.  Cycle of life stuff and whatnot.

He’s being hospitalized for three days, and assuming he bounces back moderately well, I’ll be giving him fluids twice a day, 300ml total, as opposed to the 200ml once a day he’s currently on.

So that’s the update.  I am going to stop now so I don’t break down emotionally again, as my mood is so numbed from lack of sleep the last two days due to anxiety that I’m handling it OK.  We’ll see what happens.  All I can say is that I have a feeling that, as it is going to happen eventually, the end of the road is starting to appear on Geoff’s horizon.  I won’t posit any numbers or estimates, but I have a mental “goal” or hopeful amount of time in mind. 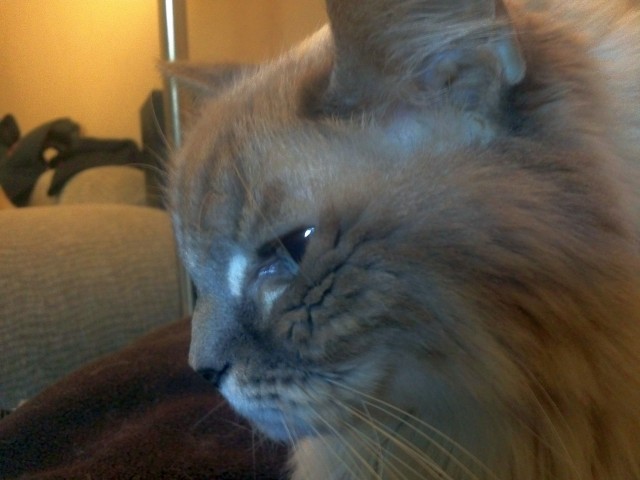 He’s in the best place he could be right now, given his situation, so I’m not … “worried”, just… yeah.  If you do the prayer or good vibes thing, please send some his way, if nothing else but to make sure he stays comfortable and in good spirits.  Throughout all of this, he never once lost his personality, never got angry, just somehow knew he’d be taken care of.  I have no other choice at the moment, so… yeah.  More to follow.

This entry was posted in Musings, News, Pets and tagged cat, geoffrey. Bookmark the permalink.